FlexiSPY vs. Mobile Spy Android
Which Is The Best For Spying On WhatsApp?

This article examines the ability of FlexiSPY and Mobile Spy to effectively spy on WhatsApp messages that are sent and received from your target phone. We also discuss what “rich content” is and what kind of shared media is or is not captured by each product.

Mobile Spy doesn’t make any claims about what parts of a WhatsApp communication they do or don’t capture, but we found that Mobile Spy captures only the text part of the messages. All other media (pictures, location, etc.) either wasn’t captured at all or was displayed as random unreadable characters in the WhatsApp message logs. If you really want the full meaning of an IM conversation, you need more than just the text. Mobile Spy captured 1 of 9 possible types of WhatsApp communication, while FlexiSPY captured 8 of 9.

The communication Mobile Spy does capture is displayed in sequential rows line by line, while FlexiSPY’s layout is more conversational with each contact on alternating sides for easy readability, the same way WhatsApp is displayed on the phone itself.

Aside from WhatsApp, Mobile Spy also claims to capture Facebook, iMessage, Twitter, Hangout, Viber, Skype, Line, Fring, BBM, ChatOn and Kik (as of update to 6.6). We look at each of these in other articles from this series. Is Rich Media Really So Important?

IM’s go far beyond the old text only SMS days, offering enriched media that creates much more of a conversational, interactive experience. You can follow words on a page, but you don’t know how your target user really responds if you can’t also follow emoticons, pictures and other rich content that’s often sent instead of words. If you want the real meaning behind an IM conversation, you need to capture more than simple text alone.

If a picture is sent by a contact and your target user replies “I would love to be there right now,” then without seeing the picture you can’t know if your target is referring to a hammock stretched between two Caribbean palms or the silk sheets of a new lovers’ bedroom. If they say, “Meet me here” and send location data, or if they send an audio message that says, “I love you,” you’ll miss this entirely if location and audio aren’t also being captured.

location data, or if they send an audio message that says, “I love you,” you’ll miss this entirely if location and audio aren’t also being captured.

Popular IMs like WhatsApp offer a wide variety of chat elements like stickers, emoticons, audio, pictures, video clips and location data. It’s important that a cell phone monitoring app like FlexiSPY captures much more data than text alone, which you need if you want to understand what’s really said in those chats.

Here are the nine pieces of chat information you can send via WhatsApp:

We used each of these in testing both Mobile Spy and FlexiSPY. In the screenshot above you can see a conversation with some of the WhatsApp chat elements as displayed on the target phone itself. 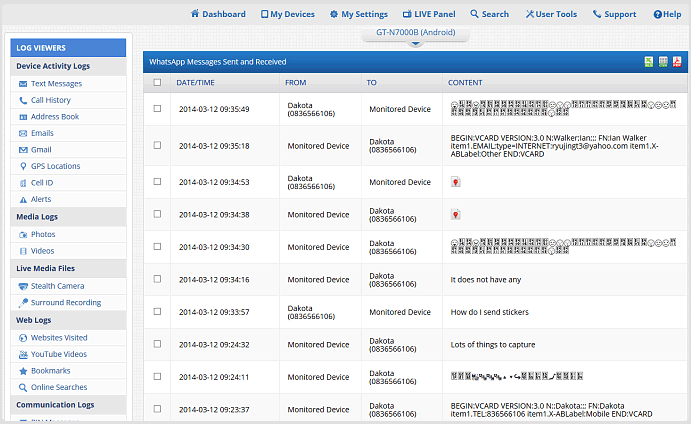 Although the text messages themselves were captured, all multimedia and other chat data was either not captured at all or was replaced by unrecognizable text characters. Neither was the contacts’ profile pictures seen, so the real identity of those contacts remains a mystery.
Only the basic chat text is readable in these logs, while any additional shared media is never displayed. You can also see the layout is displayed line by line in sequential order.

How Does FlexiSPY Capture WhatsApp? The FlexiSPY dashboard shows all chat and media elements that were shared in our conversations. The logs are also laid out in the familiar and readable style of alternating text on each side of the screen, the same way chats are displayed in WhatsApp itself.

Emoticons were also captured (such as the small smiley faces), although these are represented only by their text equivalents. That’s the only thing that kept FlexiSPY from scoring a perfect 9 out of 9 for WhatsApp content capture. FlexiSPY has proven to capture more WhatsApp chat data than any competing mobile monitoring app – including Mobile Spy.

This review was initially based upon Mobile Spy version 6.5. Mobile Spy 6.6 now adds several features including IMs like Hangouts, Viber, Line and Kik. However, we tested version 6.6 multiple times over a period of weeks, and all Mobile Spy IM services completely failed to capture anything. A quick chat with Mobile Spy support confirmed it was indeed related to the new Mobile Spy update. We can’t say Mobile Spy’s newest version won’t work for anyone else, but we only had success with WhatsApp capturing (text only) prior to Mobile Spy’s latest update. As of today, Mobile Spy 6.6 still is not delivering any IM data for any IM service they advertised.

Our findings are based on real world testing. Mobile Spy captured 1 out of 9 possible types of WhatsApp communications. This fully misses important emotional responses in conversation, shared locations, pictures sent or received, and other forms of WhatsApp conversation.

With FlexiSPY scoring 8 of 9 WhatsApp communication types, this leaves FlexiSPY filling in the gaps for all sorts of things that Mobile Spy is unable to monitor. In fact, the only part of a WhatsApp conversation that FlexiSPY didn’t completely capture was the emoticons, although it does display these in their text equivalents. The bottom line is that if you don’t want to miss anything when monitoring WhatsApp conversations, then FlexiSPY is your only choice.