FlexiSPY Vs. Mspy iPhone
Which Is The Best For Spying On Hangouts?

As it stands right now only two spyphone companies capture Google Hangouts. FlexiSPY and Mobile Spy. We already covered in detail just how much was captured by Mobile Spy and why FlexiSPY was far superior than Mobile Spy for capturing Google Hangouts chats so where does this leave Mspy?

Unfortunately, this leaves Mspy out in the cold. Mspy does not offer support for capturing messages from Google Hangouts. Furthermore FlexiSPY, on iPhone, supports an impressive 12 instant messaging applications whilst Mspy only manages to cover a third of that with support for 4 instant messaging programs.

How important is IM capturing for spy phone software?

Instant messaging capturing is more important than ever because people are simply not calling or sending SMS messages as much as they used to. Instead, people prefer video calls over FaceTime or LINE or hold entire conversations on Facebook Messenger sharing pictures and location and such with all recipients.

More and more people are communicating using instant messaging programs such as Facebook, LINE and, in the case here, Google Hangouts. In the past instant messaging usually meant just sending messages composed of text to each other but now you can share pictures, video, locations and stickers with all people you are talking to as well so simple text is just not enough anymore. 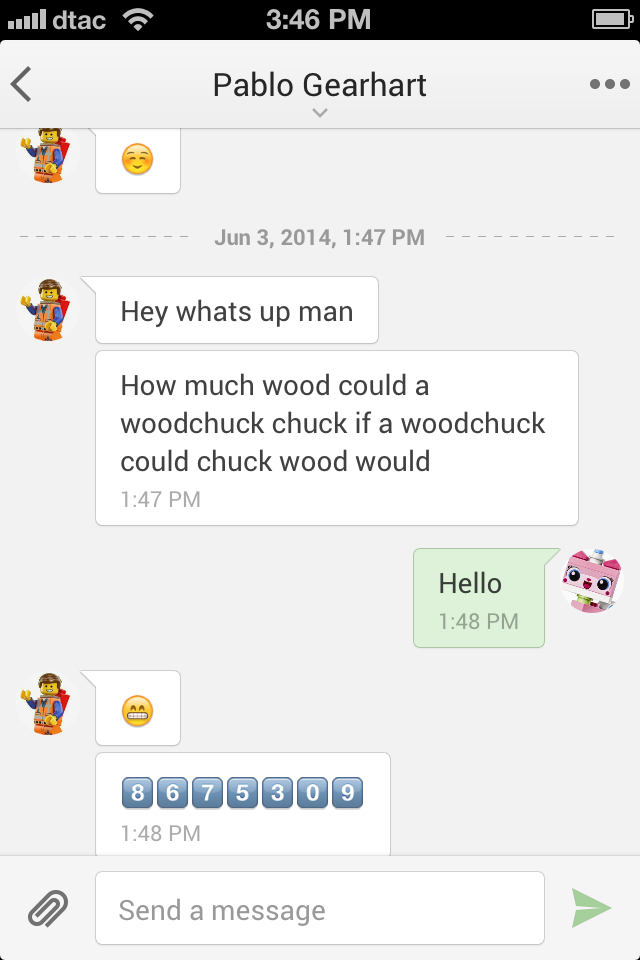 A picture can, as they say, speak a thousand words which means that one well-placed emoticon or sticker can have far more significance or value to the other person than mere text. This is something now that spy phone software is starting to capitalize on, the sharing of the rich media between people engaged in a conversation and this is something that FlexiSPY is making the biggest effort to capture.

This means that capturing the text, capturing the shared rich media (pictures, video, GPS location etc.) is more important than ever but so is how the data is presented in the online customer account. If the data presented is text only for example or not formatted in the usual conversation view so that it looks like it does on the phone itself then it means that the customer has to spend needless time sifting through all the captured IM data trying to make sense of what they are seeing.

So it is these three factors, layout in web account, capturing of shared rich media and the ability to search through the captured IM data once uploaded to the customer online account that we will be judging both FlexiSPY and Mspy on when we compare them both to see which spyphone software is the best for capturing Google Hangouts.

Mspy does not capture Hangouts, unlike FlexiSPY

As mentioned Mspy offers no support of any kind for Google Hangouts on iPhone. This may be because hangouts are not considered that popular an IM client compared to the likes of iMessage on iPhone. Hangouts is a Google product which means that the software is more suited on an Android device and it explains why the iPhone version is somewhat limited in terms of the shared rich media compared to what can be done on an Android device. Regardless of that though Mspy captures none of that so how does FlexiSPY fare? FlexiSPY captures all the details from Hangouts conversations on iPhone

FlexiSPY captures the text and shared rich media during our tests but, along with that, the data inside the online account was presented in manner as close to what you would expect to see on the device itself as possible. This means that you did not need to spend time searching for vital pieces of information. FlexiSPY’s online account also features the most comprehensive search functionality to find the data you are looking for and all shared rich media, from any IM client, including Hangouts can be saved to your computer directly from the FlexiSPY online account should you need it for further analysis.

This means that not only does FlexiSPY give you Hangouts message and shared media capturing where Mspy doesn’t it also means that, as we discussed in our review of Mobile Spy and its Hangouts capturing capabilities, that FlexiSPY gives you the best coverage and capabilities if you want to capture Hangouts on an iPhone.

FlexiSPY is the only spyphone software to offer real Hangouts capturing

Mspy offers no support for Google Hangouts on iPhone in any way. FlexiSPY, on the other hand, managed to capture all the text, shared rich media (pictures, GPS and emoticons) from every conversation as well as being able to display it inside the FlexiSPY online account in an intuitive and easy to understand manner.

This demonstrates clearly how serious FlexiSPY is when it comes to not only capturing the most IM services but also for capturing the shared rich media such as pictures, GPS location and emoticons and making sure, most importantly, from the customer perspective that the captured data is easy to interpret and understand inside the FlexiSPY online account once it has been uploaded.

In the table below you can see how FlexiSPY compares to its competitors when capturing other IM applications across all supported smartphone platforms.